Yohanne Lamoulère was born in 1980, not far from the Mediterranean sea. She obtained her baccalaureate in the Comoros and prepared a degree in art history in Montpellier. Then , she graduated from the Ecole Nationale Supérieure de la Photographie in Arles in 2004, and finally settled in Marseille.
Yohanne has never had the fiber of the mercenary portraitist, whose framing would obediently erase the disgraced character to better include the “son of” promised to a bright future. She prefers the company of people. Not because she would have made a thick concept of it, but because that’s where she lives. She puts something of her own into her images, without ever falling into navel-gazing, that bottomless subjectivity which makes the world more opaque than it really is. 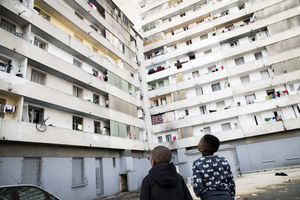